A Journey Beyond The River and Deep Into The Swamp! Irie Swamp Safari Jamaica Having lived in St. Elizabeth for over 10 years, and “done” the Black River Safari numerous times before, I wasn’t quite sure how Aquatic Ecologist Lloyd Linton’s Irie Swamp Safari would be any different. On his insistence that it would, I packed the family up and headed out for his Swamp Buggy experience – wondering even then how such an iconic south coast tour could be made any different or better for that matter.

Arriving at the dock of Irie Swamp Safari we were greeted by friendly guides who described the tour ahead and selected the right sized life vests for the journey. Once onboard the pontoon styled boat, our tour guide started pointing out the different flora and fauna specific to the morass, the history of the famous river as well as important points about the geography of the region. The longest navigable river in Jamaica at 33 miles, the Black River is also the largest remaining undisturbed wetland in the English speaking Caribbean. Spanning over 7,285 hectares the Black River Morass is home to a whopping 113 species of plants and 98 species of animals – some of whom are endemic to Jamaica – many of which our guide pointed out to us en route. Gliding upstream we saw birds such as herons, ospreys, and egrets who nest in the giant mangrove trees, while underwater the mix of fresh and salted water allow fish and shrimp to flourish in the active ecosystem.

Continuing along, our guide pointed out resting crocodiles basking in the sun, some have names and particular resting places, all are seemingly calm enough to be approached by the boat (but not touched) so that you can get a good glimpse of their scaly skin, sharp teeth and powerful tails. The reeds and tall grass are home to crocodile nests we are told, it is also where peat is formed (and spontaneously combusts during the hot summer months) and where also, randomly, the occasional marijuana farmer plants his crops. Easily the most photographed element here though are the mangroves whose roots rise out of the water like ballerinas on tip toe – some reaching up to 40 feet high – protecting the area from storm surges and erosion. 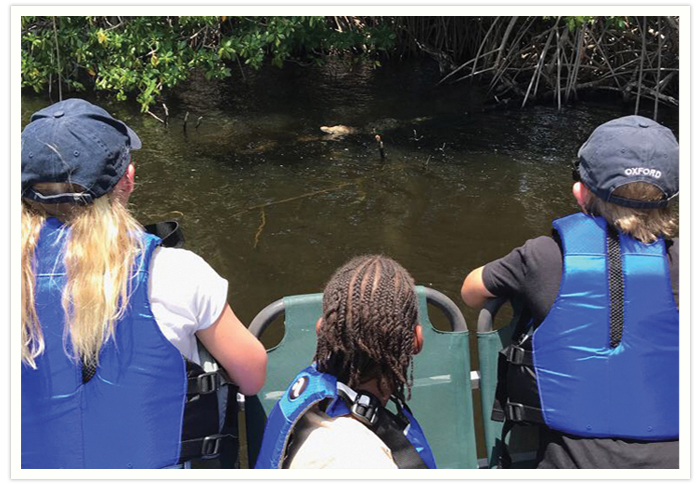 After about 35 minutes, and approximately 6 leisurely miles up and halfway back down the river, we arrived at a small dock on a protected island.  Whereas my children’s interest (based on their age and attention span) may normally have completely waned at this point under the hot midday sun, they were now fully upright and alert as there, on land was a vehicle that can only be described as a cross between a tank and a monster truck. “She is called Popeye,” the tour guide explained as she suited us up with headphones and helped us climb in. Through her mic and into our headphones she explained where we were and what we would be doing as the engines started to roar. We took off driving first into the water.

The passengers in the front were warned that it would seem as if we were diving into the river, and we were all more than relieved when the amphibian craft leveled off and floated. “But we are in a truck,” my son said astounded “a truck that floats?!” Making a short journey on the river we returned to the island by another path where our guide began to point out various features including soil types (we go from muddy smelly peat filled soil to hard limestone) and plants, including the famous Jamaican Sawgrass (or Razor Grass). First described by botanists in Jamaica, Caldium jamaicensis as it is formally known, covers about 60% of the wetlands and, if rubbed in the wrong way, is just as dangerous as it sounds. Another plant that grows prolifically is the Sable Palm, or thatch palm, whose dried fronds are used by locals to provide shelter on roofs. 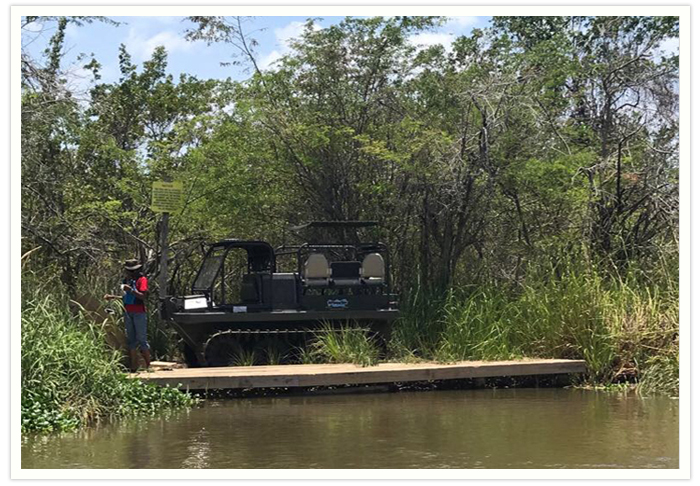 As hard as it is to pull the kids away, the buggy tour ends with a short informative walking tour of a corner of the island showing some of the smaller plant species such as tree orchids and a display of the making of logwood dye – a substance that was traded heavily on the river in 18th century.  Nearby we take an invigorating walk up to the observation deck where the breathtaking views, enhanced by state of the art binoculars, help you take in the 360-degree view of the morass, the Santa Cruz Mountains and beyond. 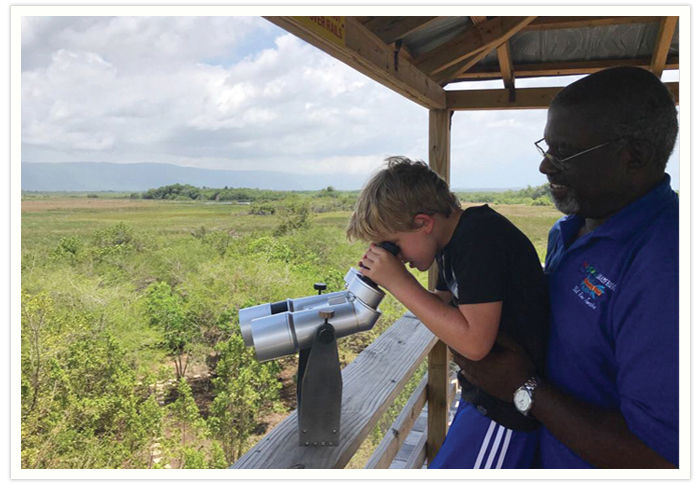 Returning back to the dock it seemed we truly had found a different way to view the area, saw things we hadn’t noticed before and if that wasn’t enough proof -- the kids were already asking when we could come back again!