Rudie's - An Authentic Taste of Jamaica in the Heart of London, UK Jamaican and Caribbean restaurants around the world have bloomed in popularity with must visit spots opening in places like Dubai, Rome, Hong Kong, across the USA and the UK. The taste for Jamaican food especially has boomed in recent years and one name has the UK diaspora raving. Rudie’s Jamaican Restaurant and Rum Bar, found in Dalston and Shoreditch's BoxPark, welcomes tourists to try both traditional Jamaican dishes and a few in house signature dishes. Jamaicans also head there for a taste of home, especially in the colder winter months.

Rudie’s restaurant has been thoughtfully conceived to offer a vibrant atmosphere filled with music, culture and relaxing island vibes, that is an ode to all things Jamaica. “Although our primary focus at Rudie’s is ensuring we serve the most authentically Jamaican food you could find in London,” explains Matin Miah, co-founder of Rudie’s, “we wanted to create a vibe that is cool, funky, casual and fun with a huge smiling persona - we wanted to bring a great big slice of Jamaica and the best “real jerk” to the streets of London.”

Designed around a centrally featured bar, the restaurant, which can accommodate up to 60 covers at one time, is as popularly known for its jerk as it is for its “rum bar” serving the UK’s largest selection of quality Jamaican rums including the likes of Appleton Estate, Edwin Charley and Monymusk.  To enhance the experience, Rudie’s has collaborated with the UK’s top Rum mixologists to create a dozen sensational rum based cocktails chronicling the Island’s history, offering modern twists on the classics like the Daiquiri and Old Fashioned as well as a very special Rudie’s flaming house Rum Punch called “Catch A Fire” made using rums from all four operational distilleries in Jamaica. There are also Jamaican and local craft beers on offer, a focused wine selection to perfectly complement the Jamaican cuisine, and an innovative selection of Jamaican inspired soft drinks such as fresh juices, smoothies and coffees.

For foodies, their signature “real jerk” dishes (including chicken and lamb rump amongst others) -- marinated for 24 hours in a secret blend of herbs and spices, smoked using pimento and sweet wood, before being cooked over coals in traditional jerk drums – are the main attraction and are served in a sharing style with innovative small plates inspired by traditional Jamaica. Open for lunch and dinner, popular menu items include Appleton Rum and Molasses Glazed Ribs, Jerk Caesar Salad, Peppered Shrimps, Soft Shell Crab in Jerk Batter and for dessert lovers, the Sticky Rum Cake with Rum Butter Sauce and Ice Cream … ask for an extra shot of rum to take the indulgence to another level! 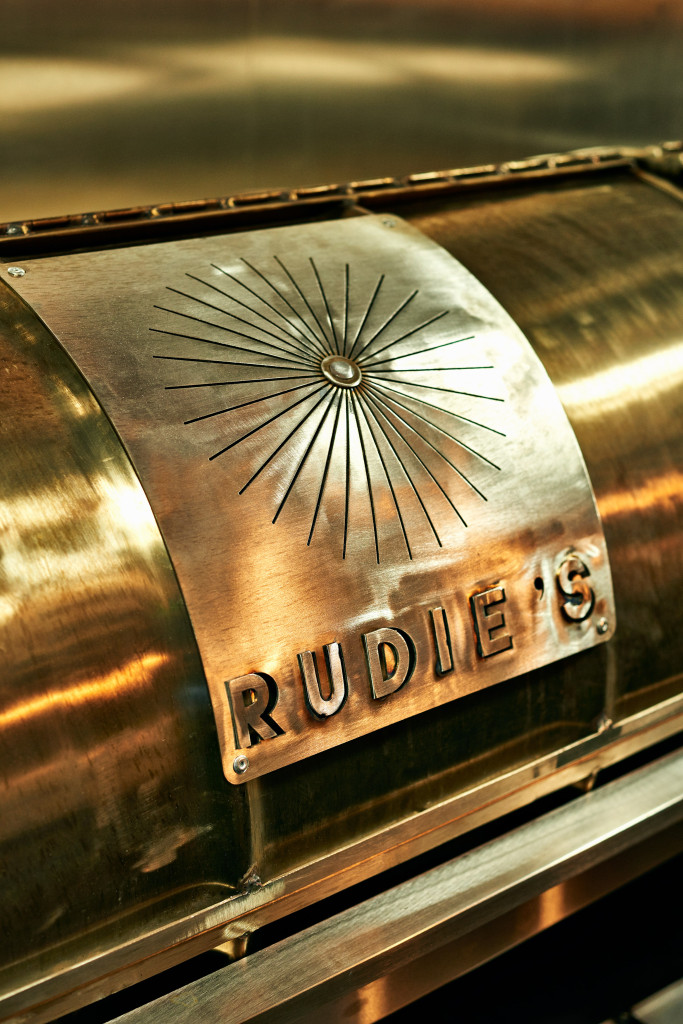 JE caught up with Co-Owner Aaron Johnston to ask him to share his reasons for wanting to have a small taste of Jamaica in central London, and also with Ms. Natalie Simpson,  a Jamaican who has lived in London for a few decades and why this is where she goes when she's missing home.


Q & A with Aaron Johnson

JE: What inspired you to start Rudie's in the first place?

AJ: Rudie's started out of our love for Jamaican Food, for Caribbean Food & Culture. In particular, Jerk. We wanted to offer truly authentic dishes, and some amazing fusion dishes as well, in a unique and stylish setting. Reggae music plays a huge part in the style and atmosphere as well.

JE: Did you feel that London didn't have a Jamaican restaurant that you got excited about?

AJ: There was definitely a feeling that there was nothing like Rudie's in London at the time. We still feel that we offer a one-of-a-kind experience. There are a few trendy Caribbean spots but Rudie's cuisine is on the highest level.

JE: Who do you see coming through your door?

AJ: There is a wide and varied cross section of people coming through. Of course, we have our Jamaican and Caribbean community showing love as they know and appreciate the authenticity. We also have quite a few young & trendy professionals who want to taste something new, all age groups really! That being said, Jerk and other Jamaican dishes are not necessarily new to a large number of UK diners. Jerk is a hot cuisine, no pun intended, these days. So a lot of foodies are actually looking for the best Jerk, and one could say once you go to Rudie's, you stay Rude! Be sure to book in advance, especially on weekends, as the word is out on who has the real Jerk!

Sean Paul and the crew recently ate at Rudie's and Richie emphatically stated that we are the best in London!

JE: How often do you get back to Jamaica?

AJ: We get back at least once a year. Keeps the homesickness at bay! Also, there is such a strong Jamaican community here that sometimes and in some places, you will feel that you are actually in Jamrock! When in Jamaica, a visit to Scotchie's for Jerk is a must! My personal favourite for Liver and Banana is Michaels Deli.. East for Sushi ..oh and Majestic, of course.. Red Bones for the Open Faced Fish Sandwhich! i could keep going!

JE: What do you miss most about Jamaica?

JE: What is the one thing you tell everyone they shouldn't miss if they go to Jamaica?

AJ: Hellshire for the Fish, Fried & Steamed. Port Antonio, so many amazing places there. Newcastle, Strawberry Hill is truly amazing, even just to pass through and look around. To stay and eat, is heaven on earth. Martini Mondays at Suzie's Bar for a great feel of modern Jamaican nightlife. and last but definitely not least Kingston Dub Club, hosted by our good friend Gabri, keeping the Real Reggae Music alive and taking it to the next level

JE: Why did you decide to try and recreate a Jamaican rum bar theme?

AJ: What goes better with Jerk than Rum! Well some would say a cold Red Stripe, so of course, we have that too! We have the largest collection of Jamaican Rums in London and it keeps growing! Our new downstairs bar, Roots Lounge, is open now so stay tuned for some more exciting news in the world of Rum...

JE: What is the most popular drink at the bar?

AJ: Definitely the Katch a Fire, named after the Legendary Bob's Album, this drink carries some serious fire power, literally! and with Wray & Nephew overproof you know this Rum Punch packs a Punch!

JE: What is your signature dish?

AJ: Our signature Dish has to be The Jerk! Whether it be Chicken, Lamb or Pork.. The Jerk Swordfish Steak is delicious too! but we put so much love into all our dishes that any one could be a signature. The Pepper Shrimp is properly peppery, The Ackee & Saltfish is absolutely amazing, Our Veggie options are Vital! from Veggie Stew Peas to the Veggie Platter, no meat in this matter! So Jerk yes, but all are invited to taste and say which is their favourite dish at Rudie's!


Q & A with Natalie Simpson - a Jamaican Living in London

JE: What is it as a Jamaican that you find inviting about Rudie's?

NS: Hmmm - definitely the food and the music!  Rudie's has a great chilled vibe ... and I mentioned the food right?

JE: Do you still feel like you're in London?

NS: Hehe- yes and no.  I went to the Rudie's location in Dalston which is a great part of London for experiencing different food cultures. But once I walk through the door of Rudie's I manage to slow down and enjoy myself.

JE: When you looked around, who did you see enjoying it?

NS: Everyone! Every time I go I see people enjoying themselves.

JE: What did you order?

NS: I usually order my belly full of food - lol.  This time it was the Peppered shrimp, Curried soft shelled crab (this was a special starter ), Jerk chicken, rice and peas and fried plantain.   And that was just for me.

JE: What dishes would you recommend?

NS: Everything! But I'd definitely recommend the Peppered shrimp - this takes me to straight to Middle Quarters in St. Elizabeth. Not for the faint hearted though- the peppa hot yuh see!

JE: What is your favourite drink served at the bar?

NS: I love the Jerk It Up - A spicy daiquiri.  But a cold Red Stripe is my favourite.

JE: Does it make you feel like you're home?

NS: A cold Red Stripe always makes me feel like I'm at home.

JE: Why would you recommend it?

NS: Rudie's has a wonderful vibe the music is great and The food is awesome!