Cast Away on a Deep Sea Fishing Excursion in Jamaica 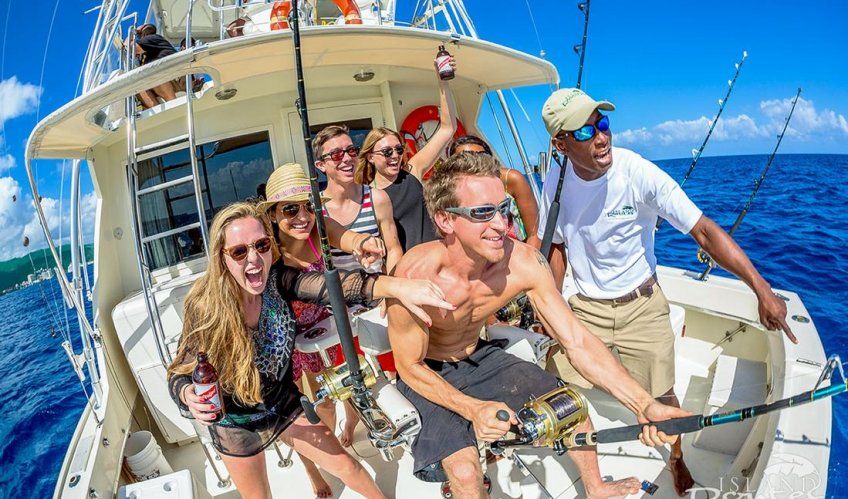 The thrill of deep sea fishing in Jamaica draws people from all over the world. Wahoo, barracuda, tuna, mahi mahi, sailfish, tarpon and blue and white marlin are some of the gamefish available in the seas surrounding the island. However, a day on the high seas swapping stories, eating good food, drinking a cold beer or world famous Jamaican rum is the stuff of great vacation stories, including the ‘one that got away’ and only topped by the story of the one that didn’t.

The waters around the Cayman Trench are an angler's dream as the slow moving one to two knot current bunches the seaweed into substantial weed lines. During the rainy season on the island, trees and additional debris get washed out to sea creating floating shelters that attract baitfish and therefore bigger fish as well. Additionally, in the summer months, with flatter seas, the weed lines grow even larger and attract more marine life.

The banks and cays around the island are good for reeling in other fish such as snapper and grouper. Pedro Bank, which follows the south coast, is the largest with many local fishermen living there for the season. Just 15 miles out to sea from Montego Bay is Buckner Bank, ideal for yellowtail, mutton and red tail snapper. With abundant waters only 15 minutes from shore and a well-equipped sport fishing boat along with the scenic views, it can add up to a quality fishing experience in Jamaica.

There are currently two major tournaments in the year, The Montego Bay International Marlin Tournament and the Port Antonio International Marlin Tournament. The tournaments are held between September and October each year. Anglers are invited from all over the world to participate in the catch & release tournament for the Atlantic Blue Marlin and game fish that migrate through the Caribbean during that time of year.

There are times of year for catching other species such as Dorado, which are in season January through to April, and black and yellow fin tuna season in April lasting until August. The core marlin season is from August to December. However, it's still common to catch these species year round.

Aside from the tournaments there are deep sea charter fishing adventures for everyone, from professionals to those wanting to give it a try for the first time. You can charter boats for half or full day trips in pretty much any resort. You may want to ask what variations are offered, as some will even offer to mount your catch or clean and cook it to order.

Even if you don’t manage to catch a thing, you’ll return to the dock from an unforgettable experience with a view of the island from far out on the sea, some cool tunes and possibly spotting dolphins and sea turtles as they swim around you in the deep waters.

Marlin Madness
Montego Bay
For a calm day of deep sea fishing in a small group or wrestling with a giant fish on a larger boat with a big group, along with a crew who’ll take care of everything for you. All you’ll need to do is fish.
www.marlinmadnessja.com

Irie Vibes Fishing
Port Antonio
Operating out of Di Ole Port Marina these charters also offer spear fishing so you can have two experiences to tell a great story about. The set out at 7 a.m. and the excursion is for half a day.
Tel: (876) 464-9508

Sea Shell Charters
Negril
Aside from a traditional day of deep sea fishing, you can book other tours that include a Lobster feast when in season, gliding along in a glass bottom boat as a simple family activity and other forays into the island. No matter what, you will have a great time.
www.seashellnegril.com

Fish Jamaica
Treasure Beach
More than one captain stands ready to take you out to sea on the South Coast of Jamaica, starting out from Treasure Beach, to fish for tuna, dolphin and more.
www.facebook.com/fishjatb

Jamaica Boats
Ocho Rios
Deep sea fishing in paradise from out of Ocho Rios can be enjoyed on either half or full day excursions with pick-ups from your hotel. There are special rates for cruise ship passengers and a lot of flexibility if you have something unique in mind, even if all you want to do is go on a sightseeing tour.
www.jamaicaboats.com