And Then She Kissed Me … Meet Misty - A Dolphin Tale A small, young dolphin, barely 4 feet long, incredibly thin, very black from the sun, weak, and barely moving after being the play toy of some local youth, and probably less than a year old,  had been found beached on the island of Jamaica in April of 2002. A call went out and the marine animal rescue team at Dolphin Cove immediately responded and headed out to help the distressed dolphin.

In the Dolphin World, a mother does not leave her baby, unless knowing she is too sick to keep up with the pod, so this little one was left to die. Still, the Dolphin Cove team thoroughly searched the surrounding sea to try and see if her pod could be located nearby, always with the hope that she had only been beached by accident. The team, however, had no success in locating her pod. The decision was made to take her back to Dolphin Cove to see what could be done for her. 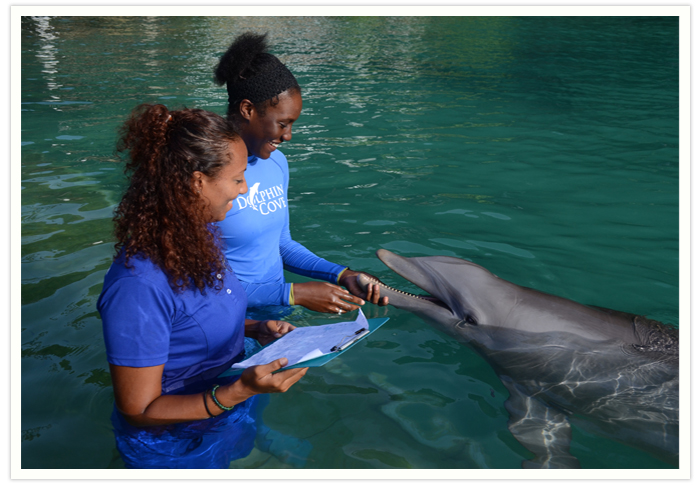 With top consultant marine veterinarians on the way, and in consultation with the Overseas Expert Veterinarian, pictures were sent of her while the feeble dolphin was placed in a natural lagoon and watched over by the team until she could be assessed. She was being called “April” by now, by the team who had found her and were worriedly taking care of her, simply because it was the month she had entered their lives. However, the news was heartbreaking after she had been examined. It was announced she only had a 20% chance of survival and would most likely not make it. The dedicated Dolphin Team worked round the clock – holding her in the water, never giving up. She was unable to eat or digest her food as she was suffering from mouth and stomach ulcers. The team vigilantly gave her medicine and liquefied fish through a tube as she was watched over 24 hours a day.

At this point she was already family, having won over everyone who had now joined in the effort to save her. It was decided by the owners of Dolphin Cove to put every resource they had towards saving the tiny calf named “April”.

There were small victories along the way but a true sign of her “come back” was when she started jumping over the divisions of the lagoons to go play with the nearby pod of other bottlenose dolphins in the large lagoon next door. What was amazing to watch was that she started imitating the other dolphins without being trained to dance with them and presenting her tail just as they did. Soon, she had also captured the hearts of the other dolphins and was immediately integrated into their pod.

Although she had gained weight and was doing so much better, “April” was in need of ongoing care and medication and the decision was made after a lot of deliberation to continue to nurse her at Dolphin Cove due to both her attachment to her new pod and the realization that she would not be able to survive in the wild. A request was made and a permit granted for her foster family to become her true family. The owners had 4 sons and had a name they had saved for the daughter they never had, and so “April” became Misty. 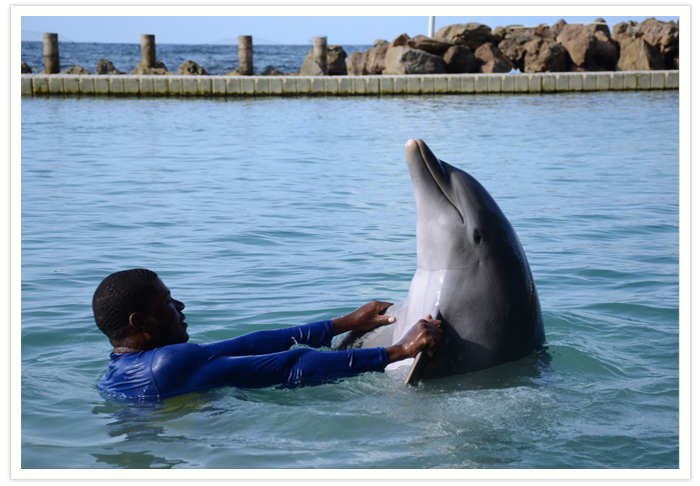 She has shared her love with children who have come to visit over the years, but one moment stands out. A young girl, only seven years old, who is autistic and had not spoken a word in her life, one day received a kiss from a creature who seemed magical and she said her first words. Ever.

Like any fairy tale, a special kiss had woken her up.

Misty continues to frolic at Dolphin Cove and is now herself a mother.  She is now a healthy 8.5 feet in length and is 330 pounds of beauty.