It's Carnival Time in Jamaica! 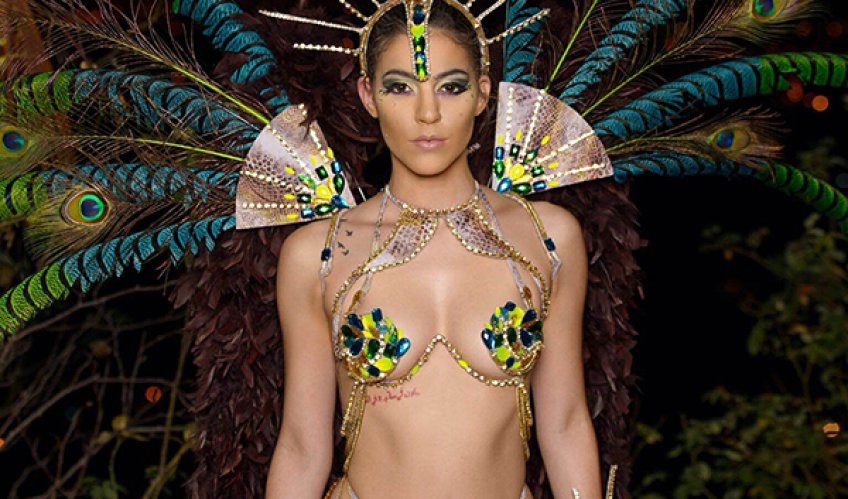 Carnival in Jamaica is all about having a good time. A. trip to Jamaica just for Carnival is a truly unique vacation experience for the entire family. You’ll get caught up in the soca party atmosphere as you dance along in beautiful costumes through the streets of the city.

Although Carnivals in Rio, Trinidad and even Notting Hill in the UK have a strong reputation for a good time, Carnival in Jamaica is a party like no other. Over the eight weeks leading up to the big parade, weekly soca parties have people jumping into the wee hours to the latest hits as the anticipation builds.

Michael Ammar, one of the original “Oakridge Boys” who first organized Carnival in Jamaica in 1989, described the first year of carnival costume design as a group of carnival enthusiasts working with a store designer to bring their very rough ideas to life. The group bought materials and did all the manufacturing of the costumes in the various bands themselves. After that learning experience, the experts were brought over from Trinidad who left their mark on the pieces, showing Jamaicans the nuances of carnival costume design.

“Sexy” is a big part of carnival all around the world and this is no different in Jamaica. The costumes get skimpier each year as costume designers push the envelope of nudity, some leaving us to wonder “how’d she fit all that in there!”

Carnival is growing bigger and bigger every year. Bacchanal Jamaica is the biggest and brightest, with its home located at Mas Camp in Kingston. Here, the weekly fetes of Carnival counting down to the big day see hundreds of revellers coming out to learn the new songs for the season, see the new costumes and watch their favourite soca artistes perform. Jamaica Carnival also has its round of parties, colourful costumes, routes and events. Started by Jamaica’s Godfather of Carnival, Byron Lee himself, they have a die -hard following as people are as loyal to their bands as they are to the drink of choice that have along the way. Newer bands are now surfacing, and costumes get more and more elaborate each year, offering greater choice to locals and tourists alike who come to join in the many parties.

These fetes usually give way to a weeklong party beginning during the Easter Weekend with Beach J'ouvert on the north coast, and the following Friday explodes with several J’ouverts (parties) under several different bands that see revellers covered in paint or chocolate, marching through the streets in the wee hours of the morning having a great time.

Saturday is another night of partying with various ‘fetes’ all over the city before the big day of “Pretty Mas” where costumed revellers are getting their make-up done and final touches on their costumes from as early as 5 am. Make-up artists are booked out in advance so get in line! The road march sees people ready and waiting by their truck in their band rom as early as 8 a.m. all decked out in a beautiful array of colors while onlookers and those who prefer to party with the bands on the sidelines will begin to gather in crowds all along the route.

The biggest names in soca music flock to Jamaica for the season and everyone sings along at the top of their lungs as they ‘chip’, ‘wine’ and drink their way through the streets of the city.

Start planning now for next year to get a great Carnival deal. The season opens early in January with the first big party at Mas Camp and previews of the costumes for the season. Most go on sale online immediately and are soon sold out so plan ahead! The biggest parties are in Kingston but there are smaller marches and the ‘soca sessions’ are always a good time and get you in the spirit, in more ways than one! Quite a few of the parties these days are ‘cooler parties’, meaning you can party with everyone else and pick and choose how much you want to spend on your Carnival Jamaica experience. The Kiddie Carnival also makes sure your kids get their own day of beautiful costumes and a road march of their own.

Michael Ammar sums up what Bacchanal Jamaica stands for in this way “Bacchanal Jamaica is good wholesome entertainment. Carnival brings out the true fellowship when all races and classes come out and mingle“